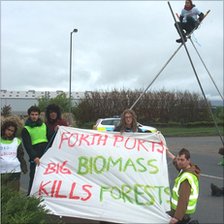 Four people have been arrested in a protest against a proposed biomass power station at Grangemouth docks.

Twenty protesters from Action Against Agrofuels blocked both the access roads to the port, but police said South Shore Road had now been reopened.

Forth Energy has said it would use sustainably sourced wood that was a by-product of the timber industry.

The partnership with Forth Ports and Scottish and Southern Energy wants to create four plants in Scotland at Dundee, Rosyth, Grangemouth and Leith.

Central Scotland Police said the activists had been arrested for causing an obstruction at South Shore Road.

Some of the demonstrators locked themselves to scaffolding tripods in the road to block the entrances to the port.

The group said there was “nothing sustainable” about creating new demand for wood and that the plant would lead to health problems because of air pollution.