But those familiar with DGR, and its proposed strategy of Decisive Ecological Warfare, are likely imagining what it might really look like if there was more overlap between the DGR and Occupy folks. Would those engaging with the public through their full-time encampments around the world—of which there are 400+ in this directory—embrace a concurrent underground resistance effort along similar lines?

The DGR concept presented in their book references a couple dozen historical examples of popular movements doing just that—from the efforts that ended apartheid in South Africa to the local forces that whittled away at Nazi occupation across Europe in World War II.

Of course, there are efforts in the here-and-now doing the same thing around the world. But most of them are in less developed countries. One example is MEND, who has been fighting a guerilla resistance backed by popular support against Shell Oil and a corrupt government in the Niger Delta of Africa, the most polluted place on the planet. Their struggle has been covered by the Earth First! Journal in the past, and is also mentioned briefly in the DGR book.

But another example, not in the book, is visible in Greece right now. In many ways, this is much closer to home for the Occupy world, since the current trend of public occupations was largely kicked off in Syntagma Square of Athens (and also in Spain), responding to the crisis manufactured by the European Union to manage the crumbling global economy by installing economic austerity measures in exchange for state bailouts. The best place to follow the struggle in english is here. But I digress… probably because I’m writing this from a bus pulling into Athens, ironically, on the eve of Oxi Day—a national holiday celebrating anti-fascist resistance in WWII. Back to the point at hand: 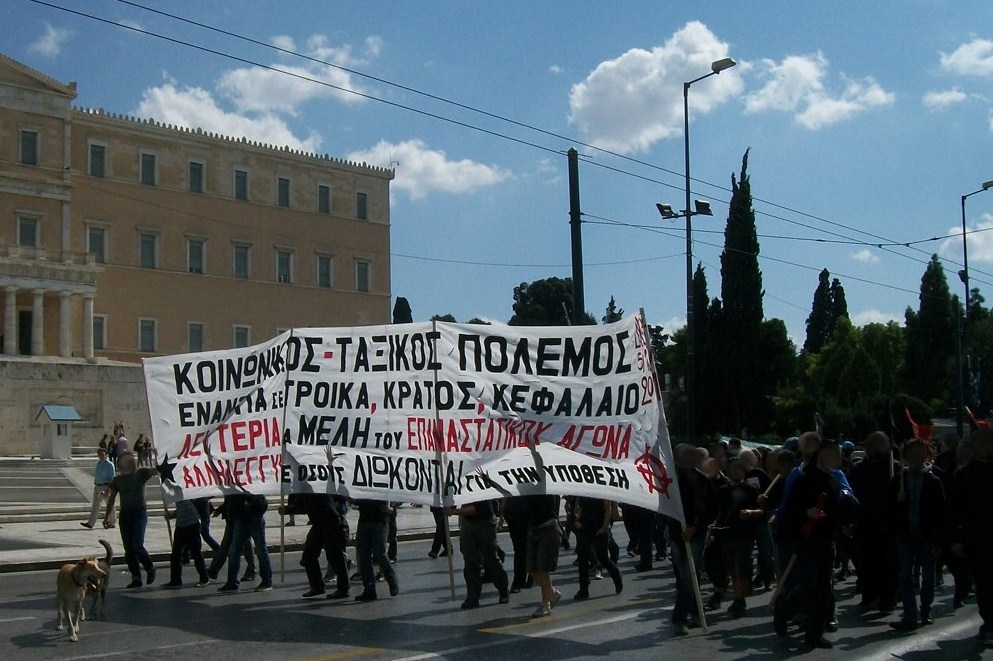 Nearly 3,000 people march down central Athens, Oct 1, 2011, in solidarity with the imprisoned members of EA (Revolutionary Struggle), Pola Roupa, Kostas Gournas and Nikos Maziotis, as well as those also persecuted for the same case Christoforos Kortesis, Sarantos Nikitopoulos, Vaggelis Stathopoulos, Marie Beracha and Kostas Katsenas, chanting “The States are the only terrorists! Solidarity with the guerrilla fighters!”

This week in Greece, the trial of Epanastatikos Agonas (EA) began, amidst general strikes and riots related to the austerity proposal this month. Members of EA (that’s “Revolutionary Struggle” in English) have taken responsibility for their participation in the group, which claimed dozens of actions against government and industry targets over the past several years. Their widespread support is visible all over the country in demonstrations, graffiti, posters and postings on dozens of websites.

While Occupy set up tents to make a point about banks being culprits of social and ecological ills, EA attacked the banks a bit more directly. In 2009 they attempted to blow up a Citibank headquarters in Athens. It didn’t work out, so they followed up by blowing up a branch of the bank instead. And when they were falsely accused of risking mass casualties, they refuted it with precision. That statement is worth a read if you are curious to get sense of where they are coming from.

After several delays—coincidentally due to the general strikes—trial began October 24. The defendants opened with an articulation of why they do not recognize the legitimacy of the court, as an extension of the same system they are fighting. Their defense also includes a technical challenge on lacking evidence to link the individuals to the alleged crimes. Three of the accused have taken responsibility for involvement with the group, but have not confessed to the charges against them—which include accusations of terrorism (even though they have no charges related to actions targeting civilians.) The case is now on hold until November 1 and there is a pending request for European Court of Human Rights to oversee the basic procedural principles in trying the EA members for alleged crimes, not simply for their political affiliations.

There are several other groups and individuals in Greece who have also taken the path of underground resistance, with much aboveground support. Their legacy too is literally written on the walls, usually with spray paint. Some of them are household names, for example, the famous bank robber, Vassilis Paleokostas, who distributes liberated money into small villages and has escaped from prison multiple times, via helicopter assistance.

Solidarity march in France for the Il Silvestre 3

And there are other current examples, similar stories of underground resisters who choose to reject affiliations with conventional politics—as the Occupy has also thankfully done. But we usually only hear of their underground efforts in mainstream news when they get caught. Take the recent case of the Il Silvestre 3, who went to trial in Switzerland this summer. The individuals in this case, and the group they are involved with, are claimed to be responsible for many attacks against elite technology targets. They were sentenced to 3+ years in a Swiss prison, for an attempted attack on a nanotech laboratory being built by IBM. They will reportedly face additional time under Italy’s anti-terrorism laws—although, again, they did not target civilians.

But there are many more actions going underneath the radar of people who don’t read the dozens of communiqués posted online at sites like: Contra Info or 325. Take note on these sites, for every person arrested relating to underground activity, actions multiply announced in their honor.

While few of these groups embrace a strict policy relating to the use of violence, their actions tend to target property, not people. A statistic on the Earth Liberation Front (ELF) in the US comes to mind: in being associated with over 1,200 documented actions, totaling over $100 million in damages in 15+ years, not one injury has been killed. The ELF actually does have a policy against injuring people, and still the State prosecuted those arrested as terrorists. 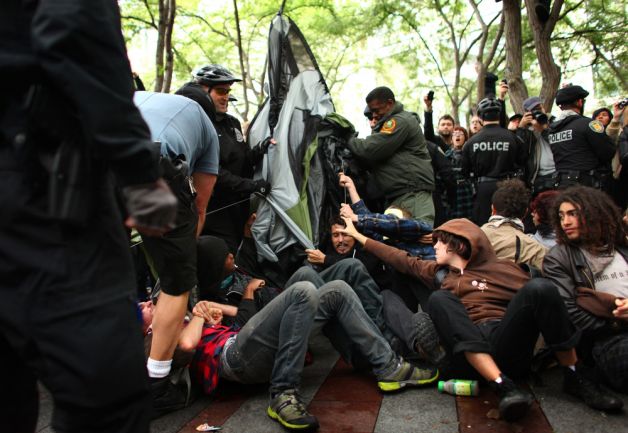 Demonstrators and police fight over a tent during the Occupy Seattle protest at Westlake Park, where prominent labor leaders sent a “letter of solidarity” to Occupy Seattle: “On behalf of the Washington State Labor Council, AFL-CIO, and our 500 affiliated local unions and over 400,000 union women and men we want to express our solidarity with “Occupy Seattle” for standing up for and speaking out on behalf of the 99% who have victimized by corporate and political decisions that put the interests of corporate America and Wall Street before the people.” Photo: J. Trujillo/SEATTLEPI.COM

In a time when many groups are jumping on the Occupy bandwagon, including the Sierra Club (who issued a national statement of support for the movement, although they still technically have a policy against members engaging in civil disobedience), what direction will the public occupations take?

Let me be clear, I am not suggesting that the Occupy movement should have to make a choice between DGR and Sierra. It’s not an either/or scenario (at least not for me—I’m both a Sierra Club member and a suspect on the Joint Terrorism Task Force watch-list.) Really, it’s a challenge to see if we can ditch the horizontal hostility and move forward where we agree, as effectively as possible.

The real question of interest to me: Is there is actually a movement afoot capable of interjecting on the brink of ecological collapse and stopping the global economic system from simultaneously crushing what’s left of the planet’s biodiversity and humanity’s social freedom? If there is even a slight chance in hell that the answer is “yes.” Then let’s really go for it.

It seems few disagree these days, from Occupiers to Tea Partiers: corporations and governments both suck. We live under what is best described as a global dictatorship of the market. It’s a regime enforced by an expensive police state at home, military empire abroad. Its only a matter of time before these forces respond as they did this week in Oakland.

Over throwing the global economic system is just as relevant today as ending fascism or apartheid was in decades past. Unfortunately, the task of resistance movements today is quite a bit broader, as the targets are more widespread and amorphous; no doubt this is by design of the elite, the 1%. But it’s not impossible. It can’t be—after all, it’s infrastructure was built by us, the other 99% (give or take a few decimal points.)

So, what do you think? Is something to bring up for discussion at your next general assembly? Just remember your basic security culture protocols.

P.S. As I prepare to post this, the Greek government’s Oxi Day parade, featuring tanks and soldiers of the state who is repressing today’s resistance, is canceled by mass protests in the street’s of Thessaloniki; in Kalamata, there are reports of eggs being thrown at politicians in the parade...